On February 20, 2013, a Philadelphia court found India Spellman guilty of second-degree murder, robbery, and related charges. She received a sentence of 30 years to life in prison. India was just 17 years old at the time of her arrest and a standout high school basketball player. She had never previously been in trouble with the law.

India Spellman did not commit these crimes. Her wrongful conviction stems from the fabricated testimony of a 14-year-old child, police misconduct and abuse, and an inept and ill-prepared trial attorney.  We can prove that India Spellman is legally and factually innocent. Read more below.

India needs your help. If you were in contact with India in August 2010 by phone, text, email, Facebook or other social media please contact us at right away info@phillyjusticeproject.org. We are working with India and her attorney, Todd Mosser, to gather further information in support of her alibi. If you need help accessing your Facebook archives, use these instructions.

At the center of this case are two crimes which occurred on the afternoon of August 18, 2010 in the city of Philadelphia. At approximately 2:30 pm, Shirley Phillips was robbed at gunpoint at a bus stop. She was approached by two individuals—a “black male and a black female.” The male stumbled toward her while the woman pointed a gun and demanded her purse and work bag. Ms. Phillips tossed her bags in the street and ran to a neighbor’s house for help.

Approximately an hour later at 3:48 pm, police in the 14th District received a radio call indicating that a “person with a gun” had been reported at a residence a few blocks away from the location of the Phillips robbery. When police arrived at the scene, they discovered the homeowner, George Greaves, lying face down in the bushes. He had been fatally shot once in the chest. He died at the scene. 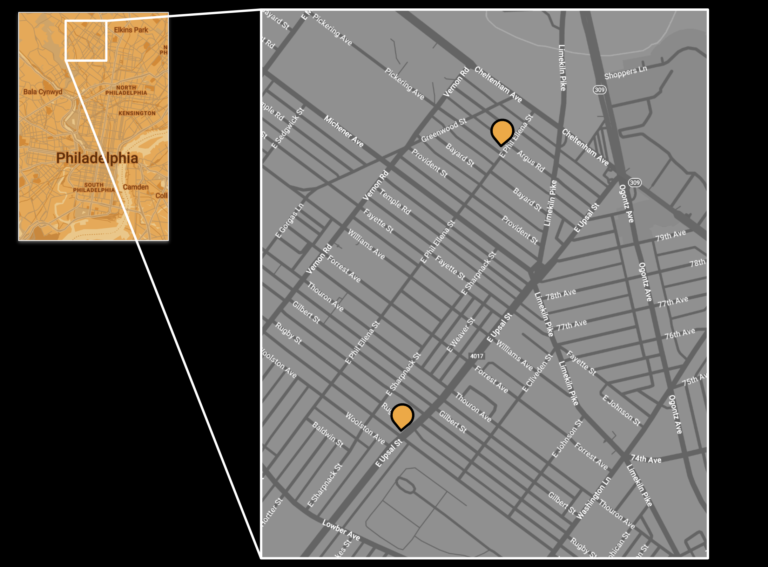 The boy involved in these crimes was 14 years old. A close female family member turned him in to police. He had a distinctive facial tattoo that exactly matched eyewitness descriptions.

What remains a mystery is the identity of the woman.

Eyewitnesses also described what the mystery woman was wearing: “all black Muslim clothes” that included a head scarf that did not cover her face.

None of these descriptions match India Spellman. Not then and not now. In 2010, India was a skinny 17 year old who was a standout on her high school basketball team. The police officer who brought her in for questioning described her as “thin.”

She is light-skinned. She has never been Muslim. Police did not recover any Muslim garments in a search of her home. Check out these photos of India from the time period in question. 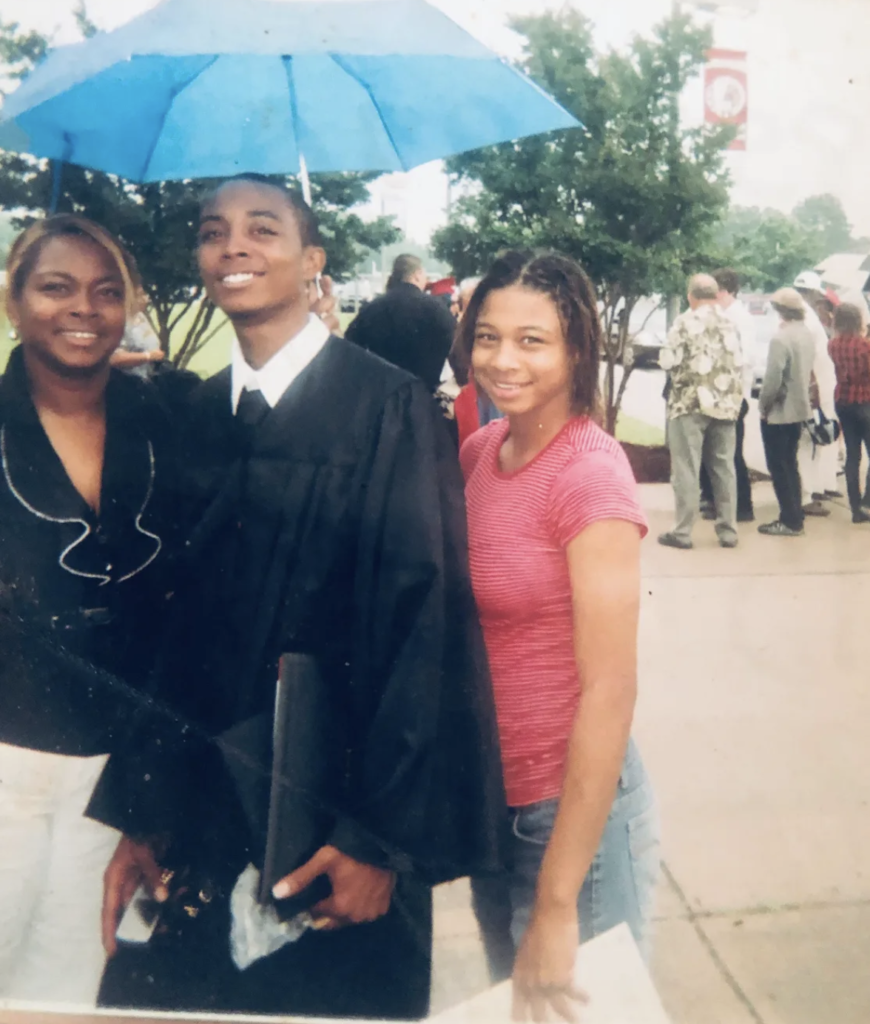 India, pictured on the right, with family.

India has an airtight alibi. During the time of the Phillips robbery and the Greaves murder, she was in her family’s home with her father and grandfather. Both men report that India was talking on the phone, sending text messages, and working on her computer throughout the afternoon.

India’s alibi is supported by phone records that include location and activity data. From 1 – 4 pm that afternoon, India was on 25 phone calls from her personal cell phone.

Notably, from 3:33 pm to 3:58 pm, India was on a 25 minute call to a friend. Recall that police received the radio call regarding gunshots at the Greaves residence at 3:48 pm.

It defies logic that India–a young teen with no history of trouble with the law–would somehow be able to hold her flip phone in one hand, carry on a normal conversation with a friend, all while taking aim and shooting a person she was purportedly attempting to rob. 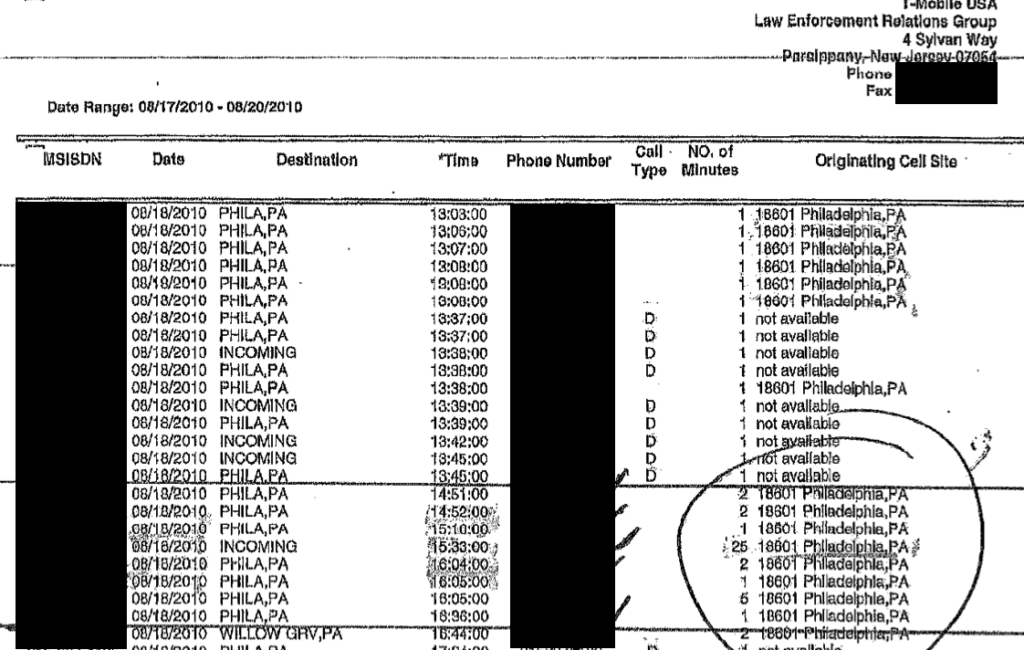 India only became a suspect in this case following police interrogation of the 14 year old child. The child incriminated himself and signed a statement maintaining that India was the shooter. He later filed a motion to have his initial statements to police suppressed. That motion was denied.

On the afternoon of August 20, four cops arrived at the Spellman home. Two were uniformed officers and two were homicide detectives. They placed India in handcuffs and separated her from her family. At no time did they indicate she was a suspect in the case. 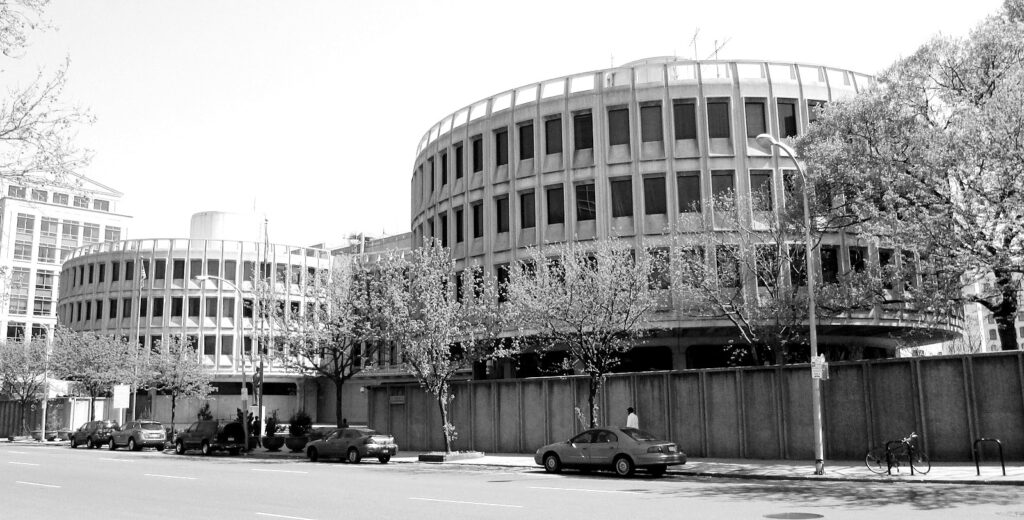 Philadelphia Police headquarters, known as the Roundhouse, where India was interrogated. Photo by Beyond My Ken.

Inside Philly PD’s notorious Roundhouse, India made multiple requests to exercise her Constitutional right to have her parents present during questioning. She further indicated that she had a learning disability that made it impossible for her to understand some of the written material officers demanded that she sign (including a Miranda waiver). Detectives ignored her requests.

Detectives similarly and strategically ignored the requests of her parents to be present during India’s questioning. At no time while she was in police custody was India able to see or make contact with her parents even though they were all there, in the same building.

This was a clear violation of India’s basic Constitutional rights and protections. It renders the entire interrogation illegal. 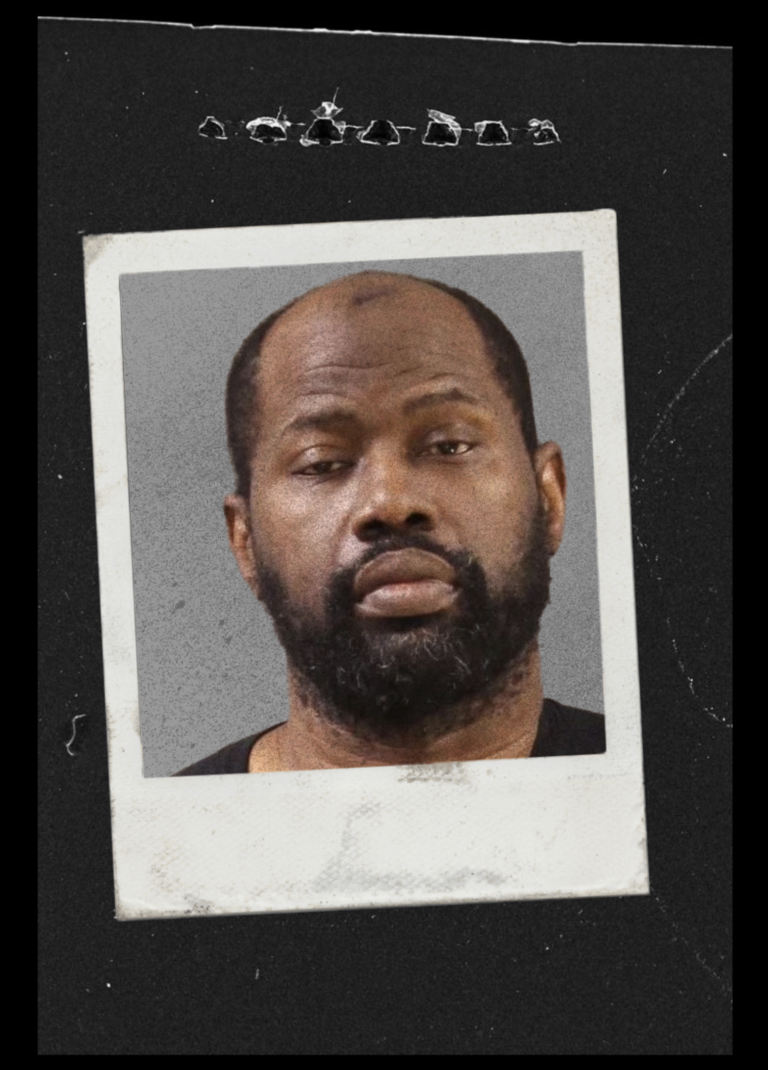 From the time India was placed in handcuffs and taken from her home, she was subject to psychological abuse and physical coercion by police. In her PRCRA petition, India alleges that one of the detectives on the case, James Pitts, physically assaulted her during the interrogation. She indicates that he hit her in the face and repeatedly poked her torso while hurling insults, derogatory names, and shouting that she was a “damn liar.”

Pitts was over 6 ft tall and 300 lbs. He towered over her and demanded that she sign an incriminating statement he had already typed up. He refused to read the statement to her even after she indicated that she had a learning disability. He promised if she signed it he would release her to her family.

This was a lie.

India was left alone in a room with the detective who had threatened and abused her. She was confused, injured, and terrified. She signed the statement while having no understanding of what it was that she was signing.

Shirley Phillips, the robbery victim, gave two statements to police on the day of the crimes. Her descriptions of the Mystery Woman were remarkably consistent and emphasized her dark skin tone, weight (“thick,” “size 18,” “180 lbs”), and clothing (dark, full length Muslim garb).

Nevertheless, at trial Phillips identified India as the person who robbed her despite very obvious physical differences.

What accounts for this glaring discrepancy?

Perhaps it was because Phillips forgot to bring her glasses with her into the courtroom. On the stand she confessed that without them, “I can’t see nothing. I’m blind as a bat.”

After a clerk retrieved her glasses and she was presumably able to get a better look at India, she acknowledged that India was neither dark-skinned or thick.

If you’re wondering how a jury could have found India guilty—particularly given the strength of her alibi—you’re not alone. We wondered that as well. And then we reviewed the trial transcripts.

Jurors were never informed of India’s alibi. They did not see phone records that established that she was at home, talking on the phone and texting, at the time of the murder.

They did not hear testimony from her father and her grandfather (a retired Philadelphia police officer) who were with her that afternoon in the family home and could vouch for her whereabouts.

They did not hear testimony from the friend she was on the phone with at the time of the murder.

Why not? India’s lawyer—the lawyer her family hired to defend her—did not bother to introduce this evidence. He did not track down potential witnesses to support her alibi—including the friend she was on the phone with at the time of the murder.

India’s lawyer did not  ask follow-up questions when Ms. Phillips admitted in court that she was “blind” without her glasses. He did not even remark on the fact a key prosecution witness characterized herself as “blind as a bat.”

This was not a matter of poor legal strategy or less than adequate preparation.

It was an abysmal failure to present even a reasonably competent defense.

It was woefully ineffective assistance of counsel.

It was a violation of India Spellman’s 6th Amendment right to effective counsel.

“It’s not justice if we leave women & girls behind.” We’re a nonprofit dedicated to ending the mass incarceration of women & girls.

Did you have contact w India Spellman on Facebook or other social media during August 2010? If so, please help!! We are working with India & her attorney @toddmosser to gather information that supports her alibi. Please share & repost. DMs are open & confidential. Together we can #freeindiaspellman ...

URGENT: we need your help 🚨🚨🚨Were you or someone you know in contact w India during August 2010 on Facebook, myspace, by phone, etc. If so, please dm us for details about how you can help her. Our DMs are open. We are working in collaboration with India & her attorney @toddmosser to bring her home asap. Please, please share this post. Feel free to contact info@phillyjusticeproject.org w any questions. Together we can #freeindiaspellman ...

Students in our undergrad chapter @villanovau are participating in #1842day to fundraise for a trip to Innocence Project annual conference & trial transcripts in our cases. If you’re a member of the Villanova community please consider donating (details on Villanova U website). ...

Wanna learn more about our work? Tune in to hear our exec director @jill.mccorkel talk w Matt Leon about why exonerations & commutations are crucial for improving the legal system. Link in bio. @kywnewsradio ...

We are THRILLED that Kim has joined our team! She will be our Inside Advisor at SCI Cambridge Springs. Like Sylvia Boykin at Muncy, Kim will coordinate outreach efforts & collaborate on developing effective advocacy strategies that benefit incarcerated women & girls. ...

Have you applied for membership in our undergrad chapter at Villanova?? Applications are now open thru Sept 7 at noon. ...

Are you a @villanovau student interested in joining our undergraduate chapter?? We are now accepting applications. Please note application deadline is noon on Sept 7 Link to apply in bio. @novanationer ...

This day has been a looooong time coming. You ready? We’re ready! Philly, let’s get this exoneration! Together we can free India Spellman!! Courtroom 1001 Criminal Justice Center (13/Filbert) 9 am #freeindiaspellman #wrongfulconviction ...

Happy birthday to our ace!! 🎉🥳🎂@ajee_briana is president of our undergrad chapter @villanovau & spent the summer with us as an intern all while studying for the LSAT exam!! We are so fortunate to have her on our team — she’s smart, hard working, & a joy to be around (plus she tolerates impromptu photo sessions and you know how much @jill.mccorkel loves impromptu photo sessions!!). ...

One more week!!! We’re not leaving that building without India!!! #freeindiaspellman #wrongfulconviction ...

The latest episode of @kywnewsradio In Depth podcast features our Director @jill.mccorkel discussing federal charges filed against officers involved in the shooting death of #breonnataylor Link to listen in our bio #sayhername ...

We rely entirely on your generosity to fund our efforts on behalf of incarcerated women & girls. For the price of a cup of coffee you can help us expand the number of people we can help. Donations are tax deductible. Link to donate in bio 🙏 ...

MERCH ALERT 🚨 We’ve got a ton of new merch, including The White Collection, just in time for the Fall semester! Check out our billowy super soft crop tops (avail in Black or White) and racerback tanks! We’ve got a variety of sizes (including youth sizing) & colors. All proceeds support our work to free wrongfully convicted/wrongfully sentenced women & to end all forms of gender criminalization. Tag us in your PJP swag for a feature!! Link in bio #philly #phillymerch #wrongfulconviction #phillystyle ...